Instagram’s Terms of Service changes are the most recent in a long string of events that remind us of the deal we make when we embrace “free” commercial platforms online. As one person put it – if your aren’t paying, you are the product, not the customer. Plenty has already been written about the changes, what they may or may not mean, and now Instragram is going back to the drawing board and revising at least the framing if not the rules themselves.

However, rather than wait for Instragram to get it right (or perhaps wait to be disappointed when they continue to get it wrong), perhaps we should think about making something different. Maybe it’s time to get serious about creating more community-driven noncommercial public space on the web. 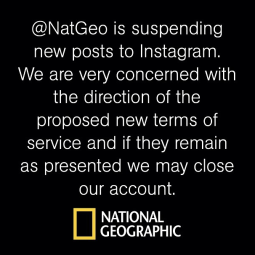 “Five years ago, most social photos were uploaded to Flickr, where they could be tagged by humans or even by apps and services, using machine tags. Images were easily discoverable on the public web using simple RSS feeds. And the photos people uploaded could easily be licensed under permissive licenses like those provided by Creative Commons, allowing remixing and reuse in all manner of creative ways by artists, businesses, and individuals.”

Dash’s post is an eloquent inventory of how the web has in many ways become more closed and fragmented. This impacts how we access information, how we communicate with each, and how we publish and create. We’ve lost key features that we used to rely on,” Dash argues, “and worse, we’ve abandoned core values that used to be fundamental to the web world.”

A day later Ryan Singel wrote specifically about Creative Commons licensing as a core value and invaluable tool on the web. Like Dash, Singel points to Flickr as a model, noting that most new social networks have left Creative Commons out of their systems of creation and curation.

For Singel, Creative Commons is part of a value system that is fundamental to the way the Internet has democratized media making and journalism. “Creative Commons embodied an ethos of sharing that went beyond just show-and-tell,” he writes. “It’s been a vital part of sharing on the net, which has given all of us access to no-cost printing presses in the form of blogs; cheap ways to create, edit, and share videos and photos; and democratized distribution channels such as YouTube and Reddit.”

Can Journalism Heal The Web?

While some journalists still like to complain that the web is killing journalism, most acknowledge that even amidst the disruption, the Internet has given more to journalism than it has taken away. Now maybe a moment when journalism organizations can return the favor. As social networks build walled gardens could news organizations help build a networked digital public square?

Open journalism, as defined and explored in Melanie Sill’s 2011 report, imagines a new kind of newsroom that could respond to the concerns both Dash and Singel lay out.

“Open journalism’s core principles are transparency, responsiveness, participation, collaboration and connection. … It’s an idea for making quality journalism a collective endeavor and transforming it from a product driven by factory processes to a service driven by audience needs.”

What if journalism organizations – especially nonprofit and public media organizations – invested in building meaningful online public spaces that helped re-establish, in Dash’s words, the web we have lost? In a follow-up post Dash suggests that we need to create such spaces:

“Right now, all of the places we can assemble on the web in any kind of numbers are privately owned. And privately-owned public spaces aren’t real public spaces. They don’t allow for the play and the chaos and the creativity and brilliance that only arise in spaces that don’t exist purely to generate profit. And they’re susceptible to being gradually gaslighted by the companies that own them.”

PBS has created the most popular online public space for children in America, why couldn’t some collaboration of public media and journalism organizations do the same for photography, the arts, music or civil debate? The possibilities here are unique – imagine a photo-sharing app with all the polish of Instagram but that also drew on news organizations historical archives to layer topic and geo-tagged news stories over photos that are shared on the site. Imagine “seemless sharing” that was built around fostering in-depth public debate about critical current event, not just about going viral and getting clicks.

Journalism As a Service

These are ideas that call on news organizations to see themselves not as a product but as a service. For Sill, open journalism is “based not on the idea that information is scarce but on the recognition that it is abundant, and sees journalism as service that taps that abundance in ways that empower citizens.” What if newsrooms took seriously the idea of building community, connecting people, and encouraging people to create as well as consume the news?

Should a coalition of newsrooms try to create a Facebook competitor? No. But if journalism organizations aren’t seriously discussing how they can be part of defining a new era in the life of the web, then the Internet will always just be something that happens to them.

However, if we really want to create these new public tools and reinvigorate the public, open and connected nature of the web, we need to think big. It will take leading news organizations coming together to agree on some central principles, if not outright collaboration. In an age when paywalls are on the rise and where it can still be hard to get news organizations to link to outside sources, this is no easy task.

On Twitter, James Losey points out that National Geographic may indeed be prepping their own social photo sharing platform and points to this tweet:

17 thoughts on “From Instagram to Open Journalism: Towards Public Space Online”