Today Circa released version 2.0 of its mobile-native news app. Normally I don’t write about apps, but something about Circa’s new app caught my attention. Not only have they rethought the basics — design, navigation, etc. – they also introduced a new feature focused on rethinking breaking news reporting.

In the wake of the Boston Marathon bombing Farhad Manjoo argued that “Breaking news is broken.” However, most of the hand wringing about breaking news has focused on a rather narrow set of issues related to news accuracy and crowdsourced investigations. Other issues regarding how our communities get access to the news and information they need, and how they understand and act on that information, have received less attention.

How might reporting during breaking news need to change to help add clarity to the flood of updates, provide context, and make news more usable and actionable to people? Circa thinks it has at least part of the answer and it is rooted squarely in the company’s strategy to atomize the news and reconsider the article as the atomic element of journalism. 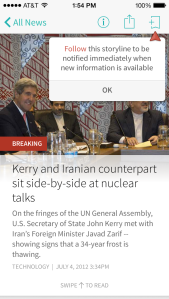 News organizations often break news via Twitter or push alerts on mobile devices. For Circa, these broadcasts become an anchor for users. They can follow the alert back to what may be little more than a nub of an article in Circa’s app. From there they can then follow the story, like one would follow a Twitter user. As the event unfolds and Circa updates their story, updates will be pushed directly to followers of the story.

However, when a reader clicks back to a story, they won’t find a traditional story narrative or a reverse chronological live blog style post. Instead, Circa editors will be organizing the updates in order of importance, not chronology. That’s important for people – some of whom may be near the events unfolding – who need access to the most critical info fast and first. The app then remembers what information you’ve seen, and helps you focus only on new information.

In an email before the app’s launched the company said they are “breaking the news, but then building the story up over time.”

Being Fast Versus Being Right

If stories on Circa are like links of a chain, the whole is only as strong as its weakest part. Given that, I asked David Cohn, Circa’s director of news, how Circa handles verification and accuracy during breaking news.

In an email he wrote that Circa, like many newsrooms, has guidelines and works hard to create a culture of accuracy with their team. However, he also said that Circa’s unique approach to breaking and building stories helps them take a slow news approach to even fast-moving updates.

“Each bit of information is its own ‘point’ in the story which means we only need to run with things we are confident about,” Cohn wrote. “If we aren’t confident – we can get it ready – but not release to the public until we are certain.”

Cohn said that the ability for users to follow a story alleviates some of the tension many newsrooms feel between being fast and being accurate. After the first alert, he said, “there is less pressure to be immediate, because the follow relationship has been established.”

What I found most interesting was how the technology, workflow and narrative strategy being employed by Circa could help not only get it right the first time but also to issue corrections.

One of the sad truths of errors is that they often spread much farther than their subsequent corrections. This is especially true on Twitter, inspiring Craig Silverman to pen the Law of Incorrect Tweets: “Initial, inaccurate information will be retweeted more than any subsequent correction.”

Correcting Tweets on Twitter is a challenge because there is no edit function or automatic way to reach everyone who has seen your tweet. In addition, with the various modes and methods of retweeting, it is impossible to know who has seen your mistake. And it is even harder to correct mistakes across platforms as misinformation spreads to Facebook, Tumblr, etc..

Circa’s ability to track which users have seen what information means that they could push an alert to everyone who had seen the erroneous info. If they wanted, they could even give people tools, and the encouragement, within the app to push that correction out to their networks on Twitter and Facebook where they might have shared it already as well.

To be clear, neither of these ideas is in part of Circa’s 2.0 release, but I’m glad to see the team thinking about these questions. I’m eager to see other news organizations experiment with how breaking news is not just covered but also delivered, and how we can build verification and corrections  into the tools and process. Circa says they will be fine-tuning the app after release based on feedback and user experience.

As I was writing this post I got a first hand chance to test out the new Circa breaking news workflow. News broke on Twitter that shots had been fired around Capitol Hill in Washington, DC. I opened my Circa app and it was the top item. So I followed the story and decided to turn off Twitter and stay off the web, only following this news via the Circa app and its push updates. The experience was largely positive – the updates came regularly, broken down into discrete elements (facts, quotes, etc).

However, checking in on the story throughout the afternoon and evening did give me a sense for how much of a culture change the Circa model is. At points, I felt a kind of narrative vertigo as I dipped back into the story. Circa’s atomization of stories into bits and ranking of elements by importance instead of chronology really works, but it takes some getting used to.

The only thing I found myself missing, as I reviewed the updates yesterday, was some of the connective tissue that longer form narrative provide. The contextual details that string elements together and help people understand how one element is connected to another, or how one detail revealed something new about other parts of the story.

This is key to a story adding up to more than the sum of its parts. That’s something I ran into when I was using Storify to document journalist arrests at Occupy protests around the country. By the end of a year I had thousands of data points and social elements documenting over 100 journalist arrests but it became hard to cull out themes and connections across that time.

I’d love to see the Circa team play with ways to use visual cues inside the app to link elements together and assert some more of that causality and context. But to be fair, this is a reflection after watching just one story unfold and the events on Capitol Hill were over fairly quickly. The team at Circa is still updating their Boston Marathon stories with new elements and details, so there are lots of opportunities to think about how you break apart stories and create new connections over time.

If you are interested in verification of social media and user-generated content be sure to check out Verification Junkie, a growing inventory of tools and tips.

4 thoughts on “Breaking Down Breaking News To Its Atomic Elements”