Creating a sustainable future for journalism will demand an entirely new approach to building community around the news.

Two stories from the past week drive that point home.

Mathew Ingram at Gigaom has a great profile of the Dutch crowd-funded journalism site De Correspondent, which brings in almost $2 million a year in subscriptions. Drawing on a piece in Fast Company, Ingram highlights how De Correspondent builds community:

“One of the key principles behind De Correspondent,” Ingram writes, “is that the news outlet and its community of readers are two parts of one thing, not just a seller on one side and a consumer on the other.”

The nonprofit journalism world includes a few big newsrooms funded by a few wealthy individuals. This model works when a major donor gives a new journalism organization the stability and safety to experiment and develop new revenue streams. But it can also go wrong: The Global Mail, one of Australia’s great nonprofit experiments, may be closing its doors because its primary funder is bowing out.

It was only two years ago that Internet entrepreneur Graeme Wood pledged five years of support, totaling over $10 million, but his priorities shifted and he decided to support a different publication.  And while the Global Mail has a dedicated readership, it hasn’t been able to cultivate the community investment it needs to diversify its funding.

Here in the U.S., the Bay Citizen launched to much acclaim with a big initial grant and a fledgling membership program — but then ended up merging with the Center for Investigative Reporting. Meanwhile, ProPublica and the Texas Tribune — both of which were launched with huge initial grants from individual philanthropists — are thriving.

What CIR, ProPublica and the Texas Tribune have in common is that they’ve all invested in on- and offline community engagement.

Many leading journalists have made the case that news outlets need to engage communities to survive:

Now that idea is at the center of the Knight Foundation’s new grant, which the Investigative News Network will administer to nonprofit journalism and public media organizations. The $1 million fund is designed to push journalists to explore new revenue models for public interest-driven news.

“For too long, too many journalists (myself included) took their audience for granted,” writesjournalism professor Jake Batsell in a post about the grant. “That’s not a viable attitude anymore … it is imperative for media outlets to deeply understand their audience and earn its attention.”

We need to build newsrooms that build community. What that looks like will vary. Longstanding newsrooms face different challenges on this front than journalism startups. But they all could do more to centralize resources, share lessons learned and create space for honest discussions with communities about their mission, work and shared stake in the future of news. 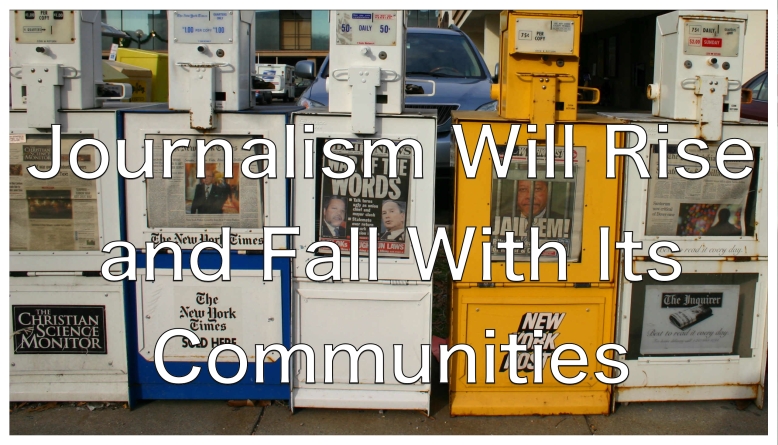 6 thoughts on “Journalism Will Rise and Fall With Its Communities”